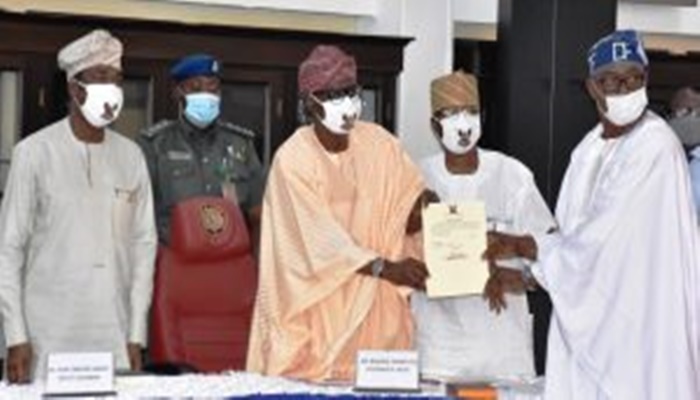 Lagos State Governor, Mr Babajide Sanwo-Olu, on Tuesday, swore in Mr David Famuyiwa as the new Chairman, Agbado/Oke-Odo Local Council Development Area (LCDA).
Famuyiwa, the former Vice Chairman of the LCDA, was sworn in due to the death of the former Chairman, Dr Augustine Arogundade, on Tuesday, June 2.
Sanwo-Olu said that the swearing-in ceremony was precipitated on the need for continuity in governance.
He said that it was also for the need to ensure that the vacuum left behind as a result of the sad demise of the former chairman was filled to pursue the continued progress and well-being of the people of Agbado Oke-Odo LCDA.
According to him, given the position of the law, the swearing-in is in consonance with Sections 24 and 25 of the Local Government Administrations Law of Lagos State, Chapter 89, Volume 8, 2015.
He said that the sections of the law provided for the Vice-Chairman to take over upon the demise of the Chairman.
”The news of the demise of Hon. (Dr) Arogundade Augustine was most disheartening because he transited to eternity at a time his contribution to the birth of a Greater Lagos was being vigorously pursued.
”He was indeed a true leader and a gentleman with a kind heart. I pray that the good Lord forgives his shortcomings and grant his family and the entire Agbado Oke-Odo community the fortitude to bear the loss.
”To the new Chairman of Agbado Oke-Odo LCDA, Mr Famuyiwa Oladapo David, I congratulate you on your ascension to this position, which has been made possible by the position of the law I have just made reference to.
”It is my expectation that you will continue to sustain the good legacy of Hon. (Dr) Arogundade Augustine and lead the people courageously within the ambits of the law,” Sanwo-Olu said.
According to him, the local government is the third tier of government that is closest to the people and as a result, the policies and programmes must be people-centric.
He urged the new chairman to continue with the provision and facilitation of services that would directly and positively impact the lives of the ordinary people within the Agbado Oke-Odo community.
The governor said that Famuyiwa’s assumption of office was coming at a very delicate time when all hands needed to be on deck across various levels of government.
”It is expected that you will bring to bear on governance, purposeful, tactful and result-oriented leadership that will not only deepen the significance of the Agbado Oke-Odo LCDA, but also enhance the living condition of the people.
”I assure you of our commitment at the state level, to discharge our responsibilities which should be complimented through local initiatives in the areas of construction and maintenance of inner roads, waste management, primary education and healthcare and security.
”Let me also use the opportunity of this moment to implore you to sustain the ongoing efforts to sensitise the people, especially residents of Agbado Oke-Odo on measures to curb the spread of coronavirus in our state.
”I am confident that if we continue to work together, we will achieve total victory over COVID-19 pandemic,” Sanwo-Olu said.
In his acceptance speech, Famuyiwa promised to work on the legacies left by the former chairman.
He said that his government would in the remaining period of the life of the administration continue to work as a team on a part of efficient management of the resources.
According to him, his administration will work on effective mobilisation of the people, to ensure the completion of all ongoing projects and other programmes of the government.
”These will be done within the context of the development agenda of the Babajide Sanwo-Olu and his star-studded administration in Lagos State.
”We express our profound appreciation to Your Excellency for considering us worthy of this call to service at this critical time. We shall not let you down,” Famuyiwa said.
In his remark, Mr Wale Ahmed, the Commissioner for Local Government and Community Affairs, said that Famuyiwa was born in 1964 and became the Vice Chairman of Agbado Oke-Odo LCDA in 2017.
Picture caption:
From Left, Lagos State Deputy Governor, Dr Obafemi Hamzat; Gov. Babajide Sanwo-Olu of Lagos State; Commissioner for Local Government & Community Affairs, Dr Wale Ahmed; and the New Chairman of Agbado Oke-Odo LCDA, Mr David Famuyiwa during his swearing-in as the Chairman of Agbado Oke-Odo LCDA by the Governor in Lagos on Tuesday (30/6/20) (NAN). 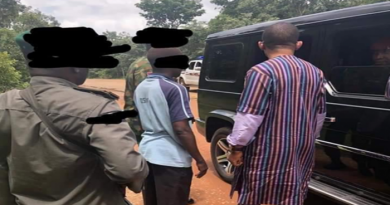 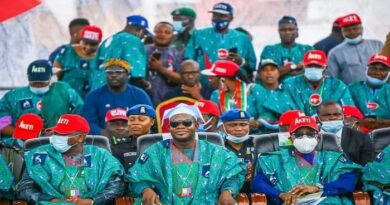 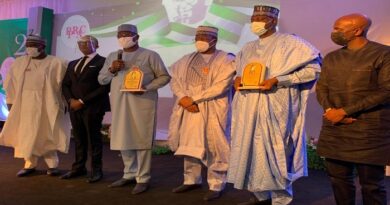